This article was published by Black Powder Hunting magazine in the summer of 2006.

What propellant should the hunter use to achieve optimal performance?

Up until 1860, firearm development was a slow process. Then, all within a decade rifles jumped from flintlock to percussion, to centerfire, to semi-automatic to the beginnings of full automatics. Today. The average hunter can choose from the most modern rifles ever made, and yet more and more hunters prefer to use a rifle design that Is centuries old – the muzzleloader. Black powder firearms have enjoyed a resurgence in popularity over the past few decades partly because of black powder seasons, and partly due to companies developing the “modern” in-line muzzleloading rifles. The use of these “newer” rifles has also led to the use a propellant that is normally shunned by traditional muzzleloaders – the synthetic black powders, also known as black powder replacements. The majority of hunters that utilize in-line rifles prefer the synthetic powders, but are they really better? Do they perform better than traditional black powder? Granted, the in-line rifles is designed to shoot a copper jacketed conical bullet, not the patched round balls used by traditional muzzleloaders, but what propellant should the hunter use to achieve optimal performance? Let’s find out!

The propellants used in the test were chosen based on availability and popularity in the muzzleloading marker except for Goex’s clear Shot. Clear Shot didn’t survive in the market due to an accident at the factory, but small inventories can be found through Goex’s distributors.

All of these propellants were tested using a modern in-line muzzleloader with a combination of PowerBelt Bullets and Barnes sabots in .50 caliber. Since I am a traditional muzzleloader, I didn’t have an in-line rifle to perform these tests. I contacted a friend who put me in touch with Ray Crow at Austin & Halleck. After explaining to Ray what I needed to do, he not only advised me on what rifle to purchase, but also put me in touch with Pentax Optics to advise me on the proper scope to use. The Pentax Whitetail Unlimited was chosen for this test. Once all the equipment was purchased and setup, it was time to begin the shooting.

Fortunately for me, the rifle wasn’t a complete stranger. It reminded me of some of my bolt action rifles that I enjoy shooting from time to time. I quickly saw why so many hunters have made the jump from modern rifles to in-lines for the black powder hunting season – the rifles are almost identical. Except for how the rifles is loaded, the average hunter is still within his or her element. Unlike trying to introduce a flintlock to these hunters, there really isn’t much of a learning curve for rifle users to use today’s in-line muzzleloaders.

Sighting in the rifle was the last obstacle before starting the tests, but this task was completed quickly, easily and accurately. I wish I could say the same with the first few shots fired through the chronograph with Pyrodex. I use a PACT Chronograph that has always proved to be a loyal piece of equipment, and now I was getting all sorts of strange data. It turns out that synthetic black powders produce a greater amount of gasses than traditional black powder and these gases create a stronger blast wave out of the muzzle. The screen of the chronograph simply didn’t like the shock that was being applied to it. The solution was to move the screens from three yards to six yards and then the chronograph was once again giving me useable data. 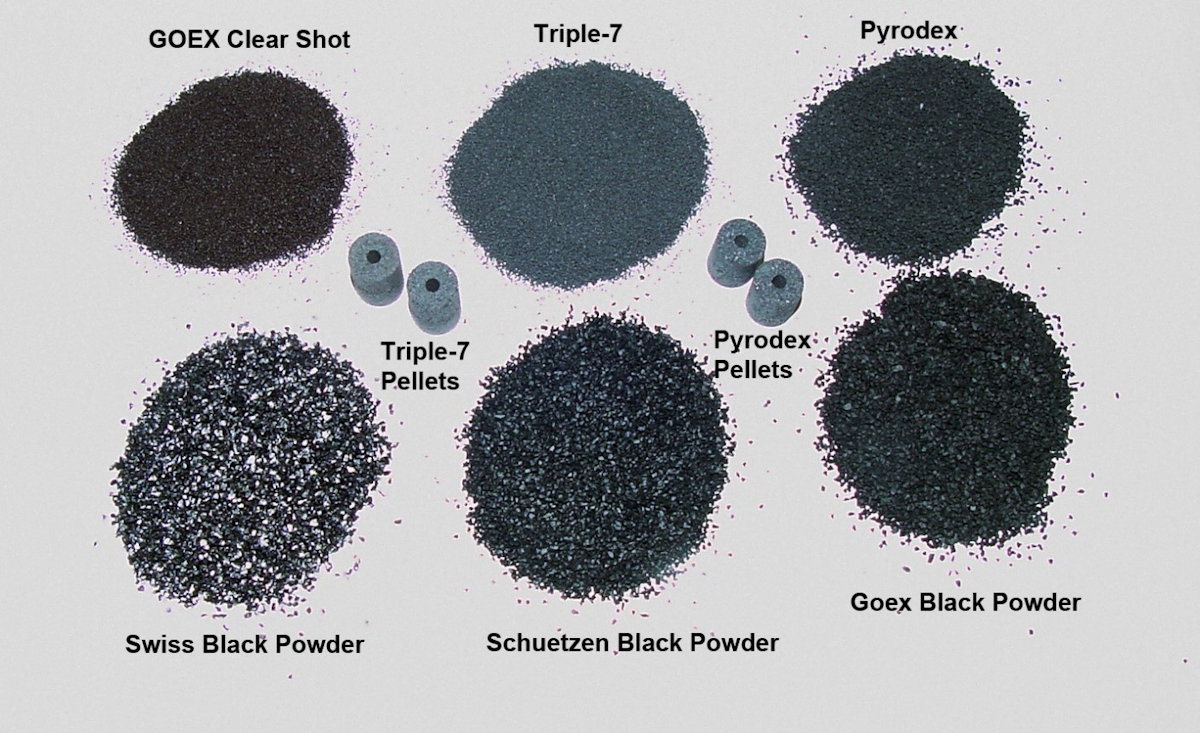 I was disappointed with the size of the group that formed using the PowerBelt Bullet. A grouping of 2 ¼” at 100 yards was way larger than what I expected. While the Barnes sabot produced a tighter group, it wasn’t much better 1 ⅝”. As far as velocities, the PowerBelt provided a velocity of 1,405.8 fps compared to the Barnes sabot of 1,634.8 fps.

I realized right away why these little pellets are so popular: loading is so much easier than using granulated black powder. Just grab two pellets, drop them down the muzzle and load the bullet. No fuss, no muss. With the Powerbelts, I saw a considerable drop in group size to 1¾’ by switching to the pellets. What surprised me the most was how the Barnes sabot group exploded to 3”. The standard deviations for the Barnes sabots dropped, and extreme spread between shots dropped, but the group was huge. Velocities with pellets were similar to the loose Pyrodex powder of 1,405 fps, for the Powerbelts and 1,707 fps for the Barnes sabots.

Scratching my head over the Pyrodex results, I moved over to Hodgdon’s latest creation, Triple Seven. It is supposed to have no sulfur and therefore no sulfur smell and no other ingredients that some shooters complain about with Pyrodex. Triple Seven is also a much stronger propellant. My first results with the PowerBelt almost had me quit this whole experiment as I was beginning to believe that I had lost my ability to aim a rifle. While I did receive a sizable increase in velocities at 1,546 fps, I also shot a 4” group. I mean, come on a 4” group? I took a deep breath, picked up the Barnes sabots, and repeated the test and received a nice 1½” group with average velocities of 1,691 fps. Overall, I was very pleased with the Triple Seven and the Barnes sabots.

The real surprise in my test was Goex’s Clear Shot. In case you’re not familiar with Clear Shot, this was a sugar-based propellant that, to my understanding, went through many years of development and unfortunately, is no longer produced due to an accident that destroyed the factory. I spoke with shooters that had more experience with the Clear Shot and was informed that there were some lot to lot consistency problems, but otherwise it was a fine powder. I was very surprised after I had fired my first PowerBelt down range. The velocities dropped from 1,296 fps with the Triple Seven pellets to 927 fps with the Clear Shot. While velocities were low, and the grouping was 2½”, the reloading was amazingly easy. The next surprise came when the Barnes sabots produced 1,161 fps with a grouping of 1⅛”. No other synthetic produced such a tight group or was so easy to reload.

As a black powder shooter, I had great expectations of the performance of the “traditional” black powders and I wasn’t disappointed. I started with Goex FFg and again with the Powerbelts and then the Barnes sabots. The results were 1,290 fps with a 1¾” group and 1,454 fps with a 1½” group respectively. No real surprise here. The Goex grouped nice and tight compared to the synthetics and had low standard deviations.

The Schuetzen black powder performed virtually identical to the Goex. The velocities and groups almost mirrored Goex at 1,287 fps with a 1¼” group for the PowerBelts and 1,443 fps with a 1½” group for the Barnes sabots. The one area that I found Schuetzen powder superior to Goex was in fouling. As I cleaned between every shot during these tests, the amount of fouling on the patches for Goex and Schuetzen were visually identical, but reloading with the Schuetzen proved to be extremely easy. Upon further investigation, I found the fouling of the Schuetzen powder to be softer and almost like a lubricant.

The Swiss black powder can be compared to driving a Porsche in terms of black powder shooting. Hot, fast, easy to clean, and accurate. While still not achieving the velocities of the synthetics, at 1,469 fps for the PowerBelts, and 1,599 fps for the Barnes sabots, both bullets proved accurate at 1½” and 1¾” groups for the PowerBelt and Barnes sabots respectively. Reloading was a breeze and fouling was minimal. 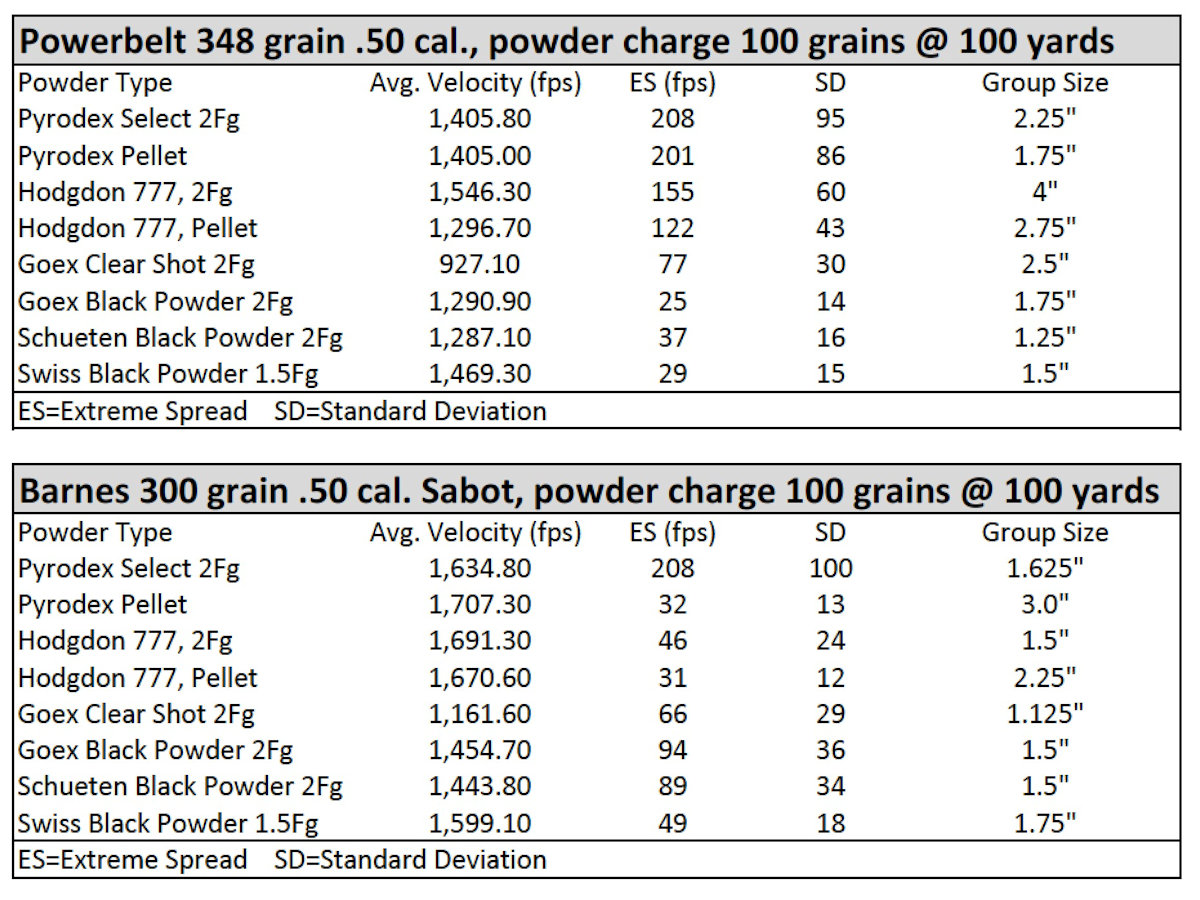 Now, what is all this talk about the synthetic black powders being so much cleaner than real black powder? The way I’ve heard some people talk; I’d have expected something similar to nitrocellulose when it comes to fouling. All the synthetics except for Clear Shot, left the bore dirty. Sure, not as bad as block powder, but dirty nonetheless. Clear Shot was the cleanest of the synthetics, but even Clear Shot produced dirty cleaning patches.

For grins, after I had completed the ballistics for this test, I tried to see how many rounds I could fire and reload without cleaning between shots. The PowerBelts performed well no matter the propellant at around four to five shots with growing resistance with each additional round. I attribute this to the basic design of the bullet that is very similar to the Civil War mini ball. Both bullets are slightly undersized to allow for quick loading but retain good accuracy due to the expansion of the hollow base that catches the rifling of the barrel and prevents gasses from escaping ahead of the bullet.

The Barnes sabot was a different story. To load the first round was difficult at best and a second round was virtually impossible without cleaning. Even thought the sabot is harder to load, it does provide better accuracy. The individual shooter will have to determine which bullet design is best for them; larger groups but quicker reloads with the PowerBelts or use the sabots with tighter groups that are difficult to reload. One suggestion that I heard was to load a sabot for the first shot and have PowerBelt ready in case you need a second shot. I understand that Barnes has come out with a new, easy to load sabot this year that should be tried.

I know that better accuracy can be obtained with the synthetics, but that would require greater testing and load development than I had time for. With the various pellets, load development is rather limited since no one wants to break pellets in half just to improve grouping accuracy. The one thing that I do know from all of these tests, given the equipment used, if a deer is within 100 yards of me, no matter what propellant is pushing the bullet, I’m taking home dinner.